Snapshot tests are a very useful tool whenever you want to make sure your UI does not change unexpectedly.

A similar approach can be taken when it comes to testing your React components. Instead of rendering the graphical UI, which would require building the entire app, you can use a test renderer to quickly generate a serializable value for your React tree. Consider this example test for a Link component:

The first time this test is run, Jest creates a snapshot file that looks like this:

The snapshot artifact should be committed alongside code changes, and reviewed as part of your code review process. Jest uses pretty-format to make snapshots human-readable during code review. On subsequent test runs, Jest will compare the rendered output with the previous snapshot. If they match, the test will pass. If they don't match, either the test runner found a bug in your code (in the <Link> component in this case) that should be fixed, or the implementation has changed and the snapshot needs to be updated.

More information on how snapshot testing works and why we built it can be found on the release blog post. We recommend reading this blog post to get a good sense of when you should use snapshot testing. We also recommend watching this egghead video on Snapshot Testing with Jest.

One such situation can arise if we intentionally change the address the Link component in our example is pointing to.

In that case, Jest will print this output: 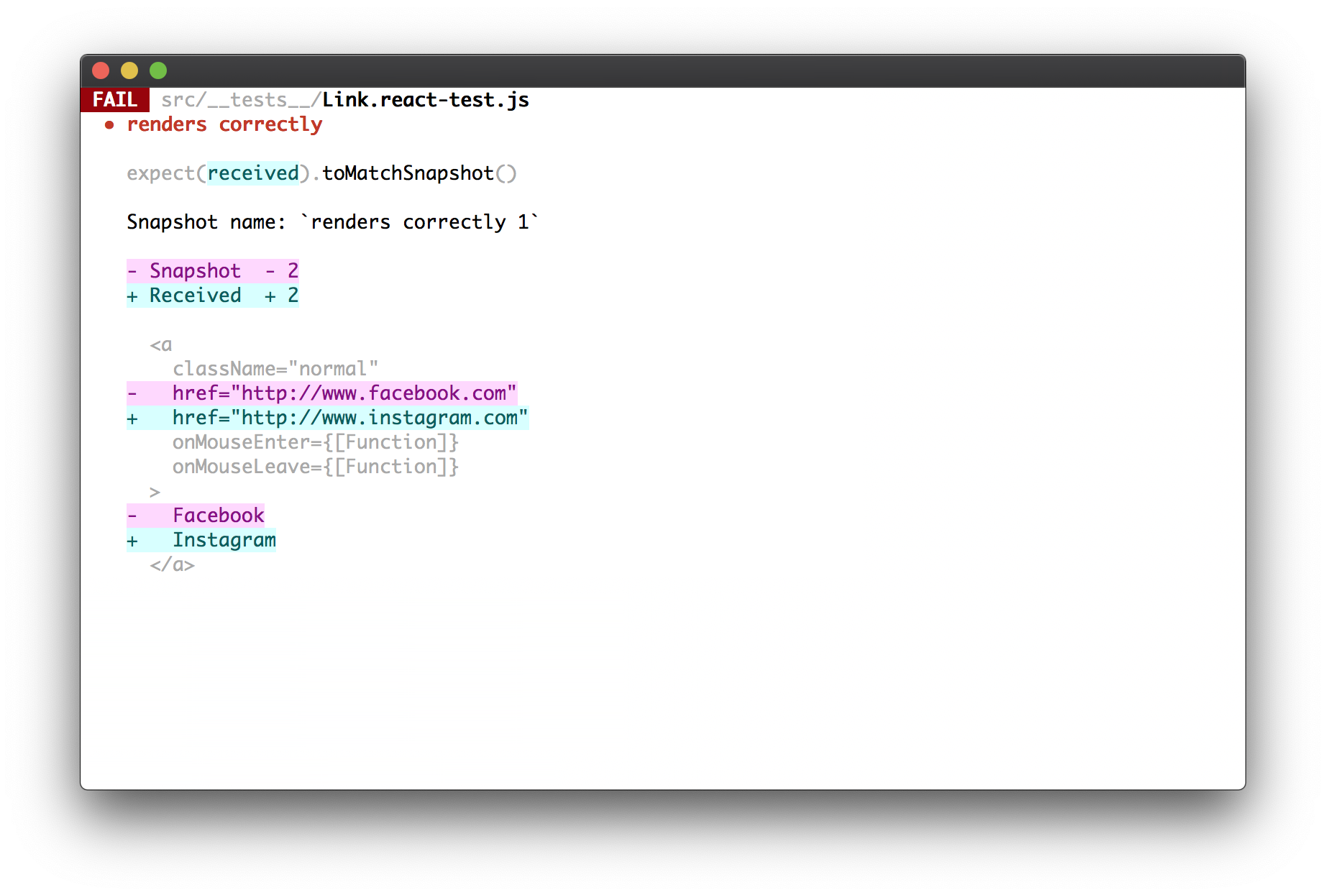 To resolve this, we will need to update our snapshot artifacts. You can run Jest with a flag that will tell it to re-generate snapshots:

If you'd like to limit which snapshot test cases get re-generated, you can pass an additional --testNamePattern flag to re-record snapshots only for those tests that match the pattern.

You can try out this functionality by cloning the snapshot example, modifying the Link component, and running Jest.

Snapshots are a fantastic tool for identifying unexpected interface changes within your application – whether that interface is an API response, UI, logs, or error messages. As with any testing strategy, there are some best-practices you should be aware of, and guidelines you should follow, in order to use them effectively.

Commit snapshots and review them as part of your regular code review process. This means treating snapshots as you would any other type of test or code in your project.

Ensure that your snapshots are readable by keeping them focused, short, and by using tools that enforce these stylistic conventions.

As mentioned previously, Jest uses pretty-format to make snapshots human-readable, but you may find it useful to introduce additional tools, like eslint-plugin-jest with its no-large-snapshots option, or snapshot-diff with its component snapshot comparison feature, to promote committing short, focused assertions.

The goal is to make it easy to review snapshots in pull requests, and fight against the habit of regenerating snapshots when test suites fail instead of examining the root causes of their failure.

2. Tests should be deterministic

Your tests should be deterministic. Running the same tests multiple times on a component that has not changed should produce the same results every time. You're responsible for making sure your generated snapshots do not include platform specific or other non-deterministic data.

Now, every time the snapshot test case runs, Date.now() will return 1482363367071 consistently. This will result in the same snapshot being generated for this component regardless of when the test is run.

Always strive to use descriptive test and/or snapshot names for snapshots. The best names describe the expected snapshot content. This makes it easier for reviewers to verify the snapshots during review, and for anyone to know whether or not an outdated snapshot is the correct behavior before updating.

Since the later describes exactly what's expected in the output, it's more clear to see when it's wrong:

Should snapshot files be committed?

Yes, all snapshot files should be committed alongside the modules they are covering and their tests. They should be considered part of a test, similar to the value of any other assertion in Jest. In fact, snapshots represent the state of the source modules at any given point in time. In this way, when the source modules are modified, Jest can tell what changed from the previous version. It can also provide a lot of additional context during code review in which reviewers can study your changes better.

Does snapshot testing only work with React components?

React and React Native components are a good use case for snapshot testing. However, snapshots can capture any serializable value and should be used anytime the goal is testing whether the output is correct. The Jest repository contains many examples of testing the output of Jest itself, the output of Jest's assertion library as well as log messages from various parts of the Jest codebase. See an example of snapshotting CLI output in the Jest repo.

What's the difference between snapshot testing and visual regression testing?

Snapshot testing is only one of more than 20 assertions that ship with Jest. The aim of snapshot testing is not to replace existing unit tests, but to provide additional value and make testing painless. In some scenarios, snapshot testing can potentially remove the need for unit testing for a particular set of functionalities (e.g. React components), but they can work together as well.

What is the performance of snapshot testing regarding speed and size of the generated files?

Jest has been rewritten with performance in mind, and snapshot testing is not an exception. Since snapshots are stored within text files, this way of testing is fast and reliable. Jest generates a new file for each test file that invokes the toMatchSnapshot matcher. The size of the snapshots is pretty small: For reference, the size of all snapshot files in the Jest codebase itself is less than 300 KB.

How do I resolve conflicts within snapshot files?

Snapshot files must always represent the current state of the modules they are covering. Therefore, if you are merging two branches and encounter a conflict in the snapshot files, you can either resolve the conflict manually or update the snapshot file by running Jest and inspecting the result.

Is it possible to apply test-driven development principles with snapshot testing?

Although it is possible to write snapshot files manually, that is usually not approachable. Snapshots help to figure out whether the output of the modules covered by tests is changed, rather than giving guidance to design the code in the first place.

Yes, as well as with any other test.